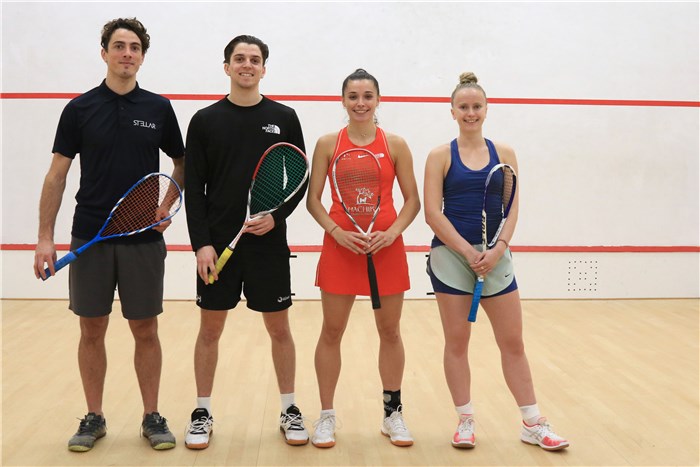 World Squash Day 2021 came to the club with a bang on Saturday night, as FOUR fine professionals graced our courts with their remarkable skills.  First up, eight brave souls from our membership, both young and not quite so young, pitted their skills against these highly ranked players, each with two sessions of ten minutes.  The pros were very kind, only bringing our star players to the brink of exhaustion and all survived to enjoy the exhibition matches that followed.

Jasmine Hutton, with a highest world ranking (HWR) of 37, won against Emily Whitlock (HWR 12) in straight games, in what was a thoroughly enjoyable contest, both entertaining the sizeable crowd, which included members from the tennis club and Redhill Squash Club, with some sparkling shot play and unbelievable retrievals (how do they stretch so far into the four corners?).  A brief Q & A session followed, covering such diverse topics as training regimes, not panicking when behind in a match and the US tour conditions (with the toll the unsprung floors take on the body).

Then, in a family affair, the brothers Lee played some truly spectacular squash, pummelling the poor ball into the nicks at unbelievable pace and treating the crowd to some marathon rallies.  The elder brother Joe (HWR 29) took the first two games, before Charlie (HWR 82) pulled back to even up the match.  The deciding game was played at an even higher intensity (if that is possible) and Charlie finally took the game to win 3-2.  The rowdy crowd then put the brothers on the spot by asking whether they really are better players than their dad (Danny Lee, a former stalwart of our club) moving on to the subjects of training during the time of COVID and just how do you hit a ball that hard.

Then it was down to the bar to reflect on the scintillating squash that had taken place and the sumptuous sausages on the plates.  What an amazing evening!!!

(Click on a thumbnail below and scroll across and to view more images of the evening.  Please click this link to go to the page where our members played a pro!)