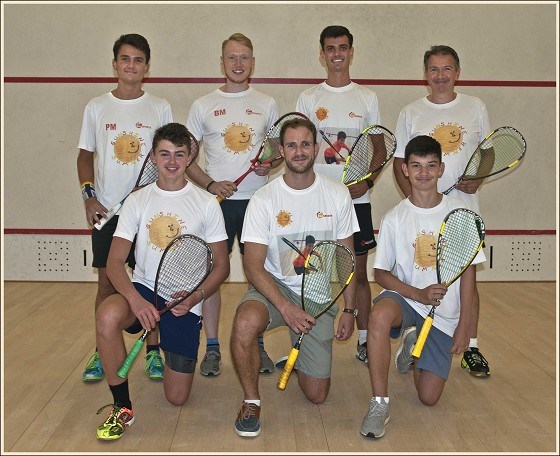 Reigate Squash Club is actively represented throughout the Surrey Leagues at all categories, i.e. Mens, Veterans, Vintage, Ladies and the ever thriving Juniors.

Surrey Cup players (and internal league players) can track their rankings on the the Squash Levels website.

All team players are expected to be familiar with and act in accordance with the club's Team Etiquette.

Prospective members wanting to investigate playing opportunities should email us by clicking here.

Reigate Squash Club has four men’s teams throughout all levels of the Surrey Leagues, playing in both the winter and summer seasons.

Our First Team generally play in Surrey Division 2 and our Fourths in Divisions 7 or 8.

Our home games are played on either Wednesdays or Thursdays.

Prospective members wishing to enquire about playing for the club should contact our Team Secretary.

The main picture is of our men's 1st team who won the Surrey summer leagues in September 2019!

Thanks to Clare Wright our ladies’ team has been resurrected after a period of 3/4 years in the wilderness!

Our ladies are playing in division 2/3 of the Surrey Cup and have regular training sessions at Reigate.  Our home matches are on Monday evenings.

Reigate have always had a strong showing in the Surrey Junior Cup, winning division one on a regular basis.

We try to field three or four teams every season from div 1 players to div 5/6.  Home matches are on Sunday afternoons.

The Veterans teams are always looking for new recruits. Our aim is to provide the opportunity to play team squash to all of those keen to do so and old enough to be eligible. Currently we have approximately 50 participants.

Vets squash is played on Saturday afternoons and is for mixed teams of 5. Men must be 45 or over and ladies 40 or over. There are 6 divisions. The first division has some pretty tasty players including ex pro’s. Reigate has 4 teams, the first team is competing is div 1, the second in div 3, third team in div 5 and the fourth team in div 6. There are 12 matches in the season played roughly every fortnight from September to April.

The range of standard in the Veterans competition is much greater than in the Mens Surrey cup, this enables us to pick Reigate members who may never have previously had the chance to play team squash.

The matches are competitive but in the main are played in a very friendly spirit. For many of us it is a good excuse to play in a team and enjoy the social side of team squash. The teams have impromptu practices, doubles sessions and socials. At the end of the year we have an informal get together (either in the club or at a local restaurant).

We build the squads and team selection around those who are able to commit to play regularly but there is a clear expectation that players are unlikely to be available for all games. We have a large number of players who would like to play occasionally but who cannot commit to play regularly. These are invaluable members of the squads giving us the flexibility to cover for the regular players.

The first team are in division 1 and the second and third teams are in division 3.   The standard of squash ranges from high for the first string and is a little easier for the number 2 and 3 strings.  Home matches are played on Monday evenings with away matches on any evening in the week.

We welcome the support of new recruits so please let us know if you would like to make yourself available and play some enjoyable vintage squash.